I bought a cheaper-than-usual Ricoh / Pentax GR APS-C camera on ebay that had a few minor issues.

One of the most visible ones was dust on the sensor, so I will show you two methods that I've used to clean it up - the hard way first, followed by the easy way.

First, to get the position of the dust spots a shot was taken with F/16 against a white background. The exposure was manually set to be as high as possible (while still retaining information), pre-focus was set to the closest position (macro).

The resulting image was then adjusted in Irfanview (Auto adjust colors) to get the highest contrast.


You need a very clean room, no dust, have a dust spray available and preferably wear gloves to avoid getting fingerprints.
All parts that cannot be cleaned after assembly (LCD cover backside, LCD, sensor) should be placed facing down on some lint-free material.
While removing the screws take note of their length, color and thread style.

The hard way - removing the sensor

Removing the back cover

First you need to remove the large rubber hand grip. Start from a corner and slowly peel it away, trying not to stretch it. Do not remove the two screws visible below, near the lens, it's not required. 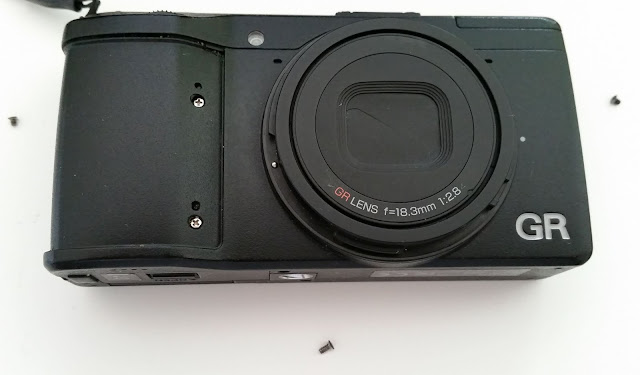 Under the flash hotshoe there are four more screws. You need to get the hotplate(?) off by lifting it from the front of the camera (lens) and pushing it to the back. 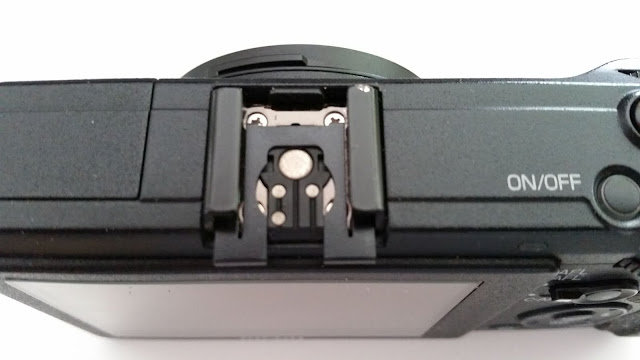 There is another screw on the bottom right, see picture below

The position of the screw under the grip, you only need to remove the one towards the middle. Also remember to open the USB/AV cover, it holds the back panel in place. 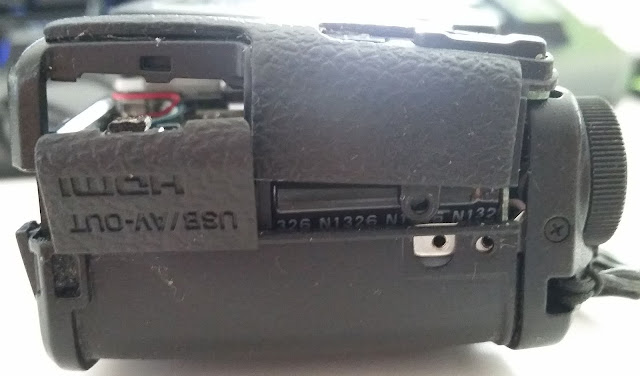 To remove the back cover, lift from the lower side and work your way slowly to the top, wiggling. Do not try to remove it completely, it should just be loose. The ribbon connecting the buttons can now be pulled out, see picture below, it should be pulled up (towards "1" not towards you). You can also leave it connected, but there is a higher chance of damaging it. 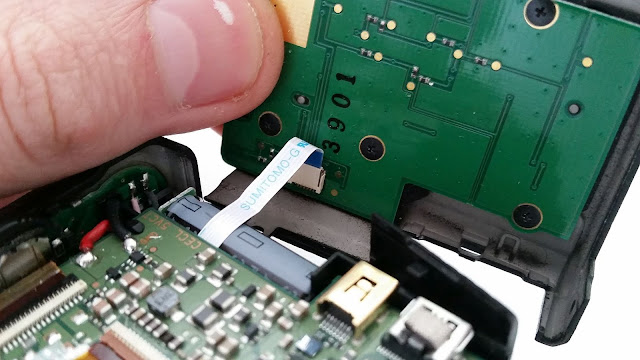 Note the routing of the microphone cables (red and black) around the LCD. You might need to loosen up the metal clips to be able to remove it. Start removing it slowly using plastic tweezers or toothpicks, in order not to pierce it. 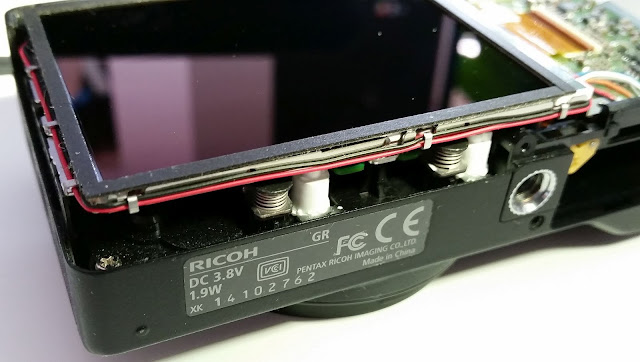 Lift the latch (black, left side) holding the LCD ribbon (yellow) and pull the ribbon from the connector. 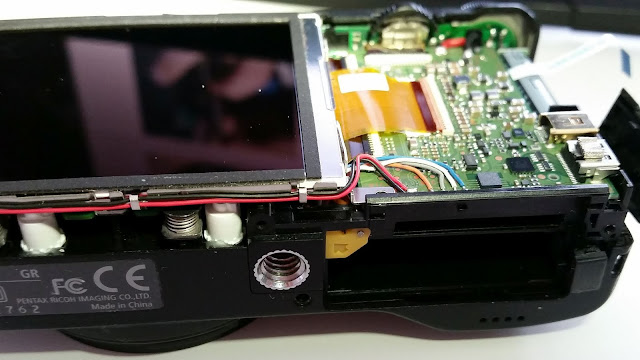 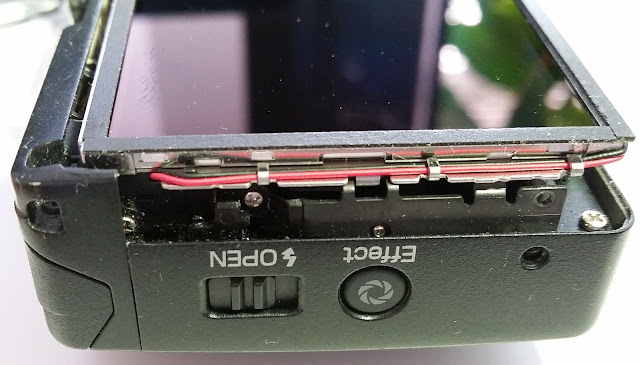 After removing the screw on the top-right side the LCD should now come off cleanly. See picture below to see where the screw is located (top metal ear). 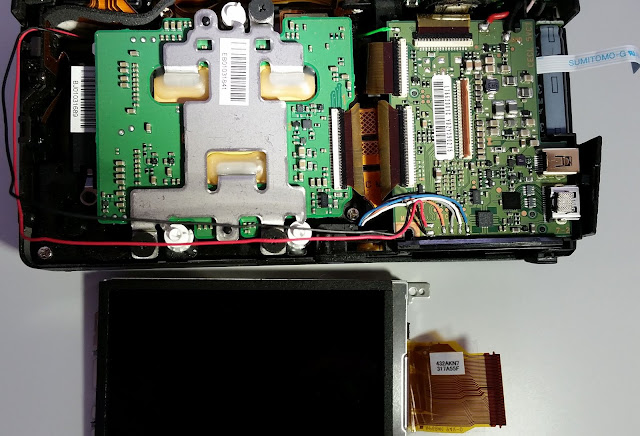 There are three spring-loaded screws, untighten them equally if possible. When mounting them back, make sure to not over-tighten them, just enough to hold them in place until they start showing resistance while turning. 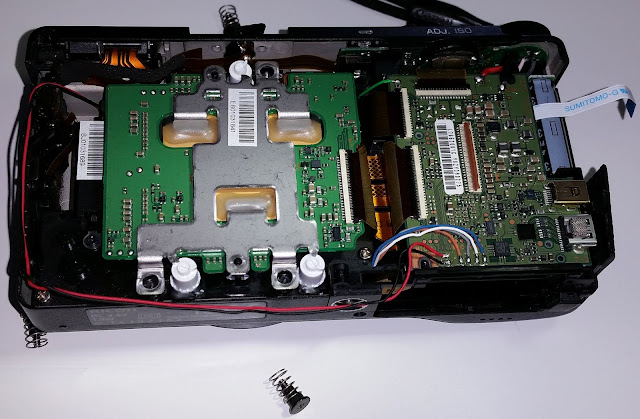 The sensor board should now come off. Notice the dust guard / skirt around it. 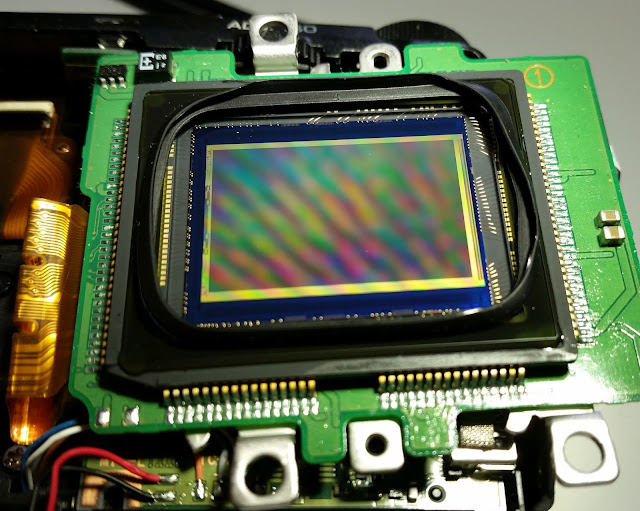 Notice the dust specks on the sensor... 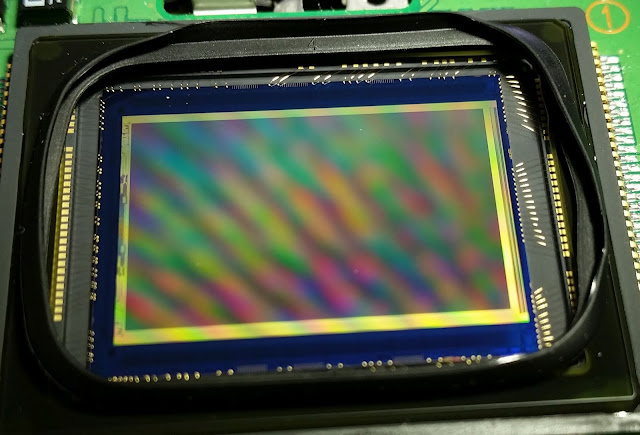 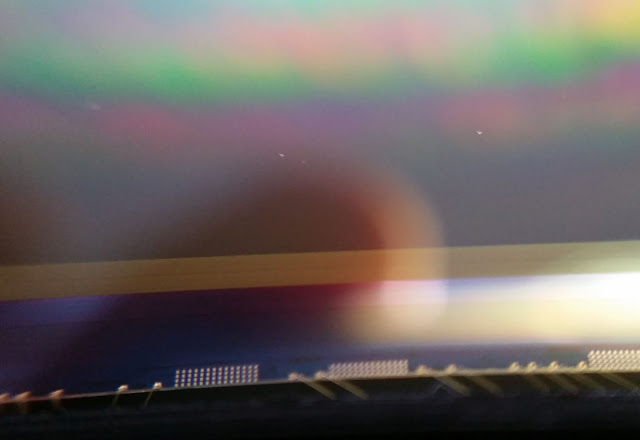 I used a dust spray to clean the particles, the dirt was not so severe. If you have serious dirt (grease spots) you should use methanol and sensor swabs. I did this procedure for my D7000, but in the case of the Ricoh it was not required.
If you don't have the necessary cleaning solution you could use isopropyl-alcohol (>99%) with cotton swabs, followed by lens cleaning dry wipes. but I recommend against it, as it takes a lot longer to clean the streaks and extra care not to scratch the sensor. 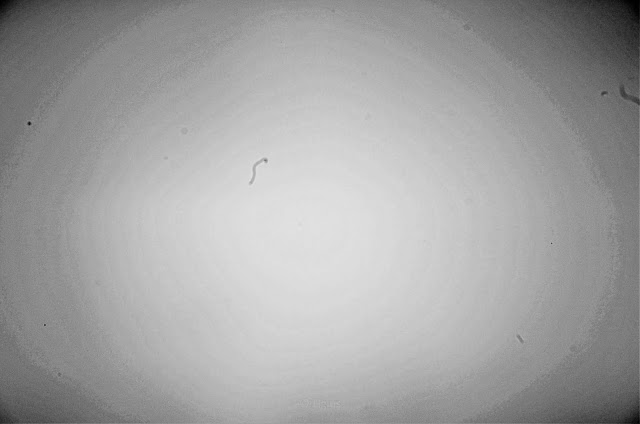 Not a great job, now there's a hair in the middle of the frame. That's why it's important to do this in a really clean environment. I'll take care of this using the easy way, see below.

Putting it back together

Notice the remaining pieces, you shouldn't have so many - I took out some extra screw. Of note is the type of screws: long vs. short, threaded vs. self-threading, black vs. silver.
Just follow the instructions in reverse to put the camera back together. 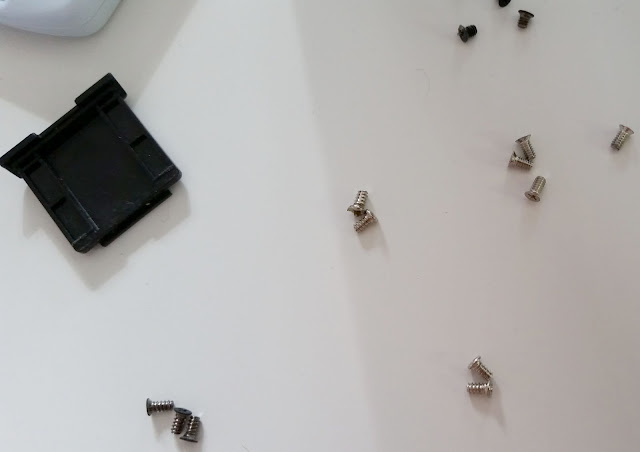 The easy way of cleaning the sensor

It's not actually that easy, but it omits the part of removing the LCD and sensor. So just use the instructions above to remove the back cover, no need to take it out completely (i.e. leave the button ribbon connected).

You should be able to lift the back side and use a dust spray. Taking the picture below as reference, the nozzle should be positioned between the left white mounting bracket and the black plastic ridge in the middle, above the green board. Do not try to push the nozzle/straw too far, it should just rest on the PCB. 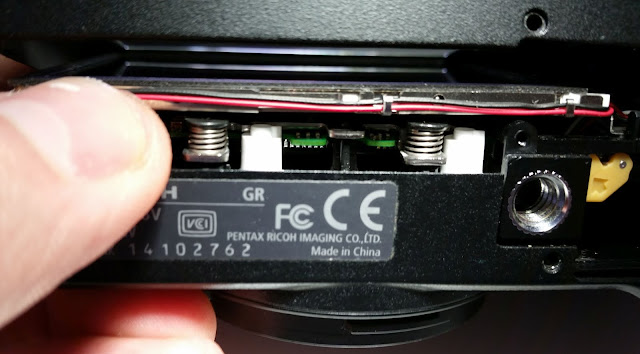 Hopefully the action would lift the dust skirt on the sensor slightly while pushing dust away to the top, perhaps even beyond the other side of the skirt.
In my case it did a pretty good job: 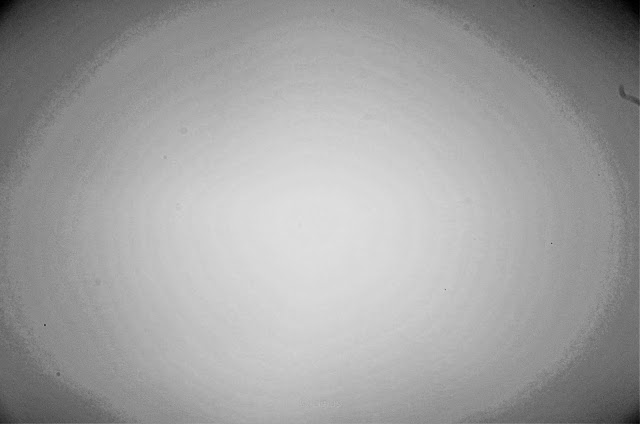 The hair on the right side is probably somewhere inside the lens, as it changes position when focusing to another distance. Dirt on the sensor should stay in the same place in consecutive photos.


This is a disadvantage of the collapsible lens design and inadequate weather sealing. I expected mirrorless cameras to not be affected by this problem that typically plagues DSLRs. It seems like it's something we just have to live with, until the manufacturers come with a proper solution to this.

In the meantime, the procedure would have to be repeated every 2-3 years for this camera and avoid shooting at anything above f/8 against a uniform-colored background. This camera is pretty easy to take apart (compared to something like Fuji X100) so it's not that painful.

In a future post I will address the issue of stretching rubber grips that don't sit flush anymore.