I have a lot of posts in my backlog that have pictures but no text added to them. Since a lot of them are more than one year old I figured I should take the effort to add the text lest I forget what happened.

There is a common problem with the DSO5062B oscilloscopes in that they get a white screen once in a while and require a power cycle to recover, temporarily. The scope seems to be functioning in the mean time but nothing is displayed.
The same device is being sold under many different name and brandings: Tekway DST1062B, Voltcraft DSO5062B, Zhongce, Protek, PCE (like mine) but it's exactly the same thing save for the splash screen and printed logo.
There's an extensive thread about hacking and modding them on the EEVBlog forum.

Here's how the white screen syndrome looks like, see below for the fix:

Getting the scope apart is relatively easy, there are two screws under the handle.

The main board is under the shielding while the power supply is the exposed vertical circut. 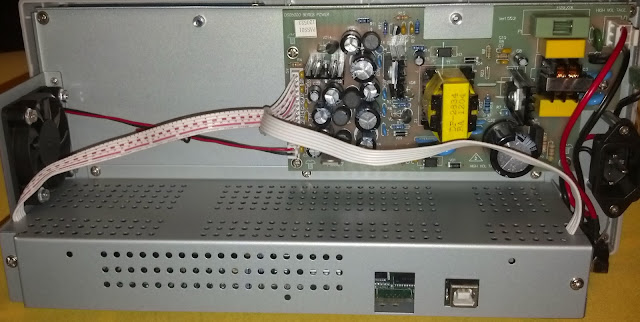 The culprits are the connectors to the two white ribbons going from the power supply to the main board. 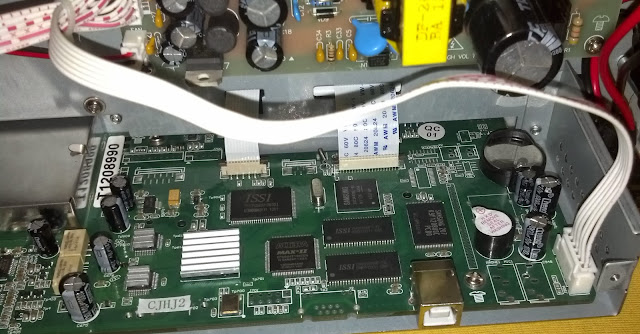 Removing and reseating them fixes the problem temporarily but what I have done is gently bend the pins using a screwdriver, in a staggered formation. That is, bend pin one 1 mm to one side, bend pin two 1 mm to the other side and so on. Until I did this the scope kept failing in the same way every couple of hours of usage, but after the 'fix' I have not had any more problems.

Some people have suggested using hot glue to secure the connectors in place but I would advise against this as the board might get hot enough to melt the glue and cause a mess.  The melted glue might also seep inside the connector, worsening the connection. It's better to use some other kinds of elastic glue, better suited for electronics and higher temperatures. 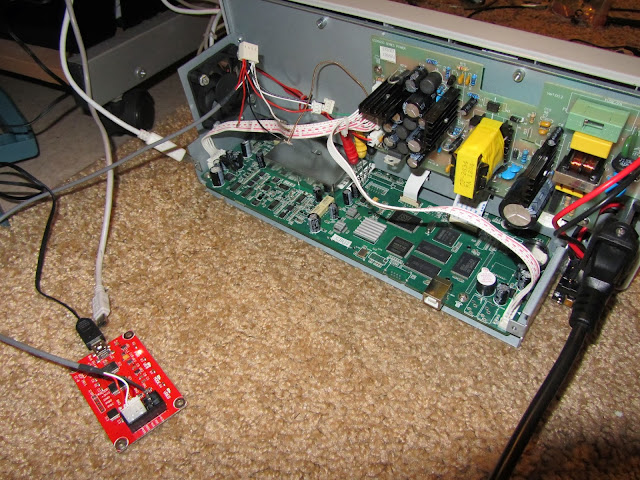 I had a few of these cheap back probe pins - shop around, I think I got 5 of them for about 10$ with shipping included. I just stuck them onto the unpopulated UART header inside the holes, using a CDROM cable to make the connection between the BusPirate and the inside of the probes.

The advantage of using this method is that you don't need to modify anything on the scope (in case you need to return it for warranty) and it can be done with parts laying around the house (think sewing needles). Plus, you only need to do it once, afterwards you can just use the back USB connection for everything.